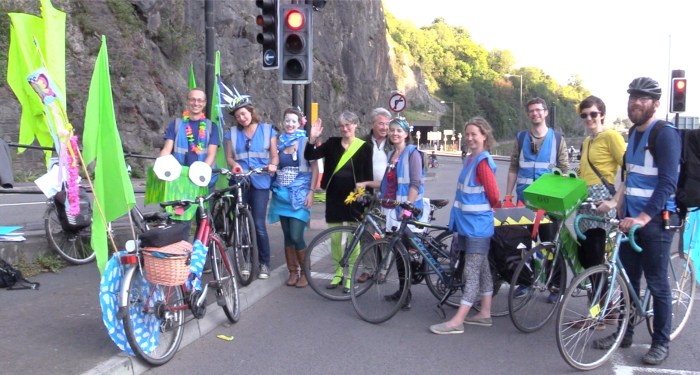 There will be no Peaceful Portway Sundays in 2018 or in future years, unless a new supporting entity can be found to provide backing for organisational issues which the Steering Group of volunteers has wrestled with since launching the project in 2015.

Although the project was initiated, planned and run entirely by volunteers, we were always dependent on the backing of supporting organisations to provide free public liability insurance, banking facilities and safeguarding support – and help with funding. That was always a big ask and we cannot continue to draw on them. They are all under increasing pressure for funds and resources.

Big thanks are due to the community-building charity Groundwork, the Hotwells and Clifton Wood Community Association – and to Rotary, for their engagement with us in 2017 – when we received over 7,000 visitors in just a few hours of peace in the Avon Gorge. And many thanks as well to Bristol Green Capital (for initial grant support in Green Capital Year 2015) Avon Wildlife Trust, The Society of Merchant Venturers, the Hotwells Panto Fund, George Ferguson’s Red Trousers Fund, Cyclebag, Burges Salmon LLP and and others who gave money and in-kind support. Our first-aid cover was provided by the wonderful team of volunteers at Avon Search and Rescue, who provide a public service which is largely unrecognised, often at great risk to themselves.

To all these organisations and the people in them, we say “thanks! It really was fun while it lasted!”